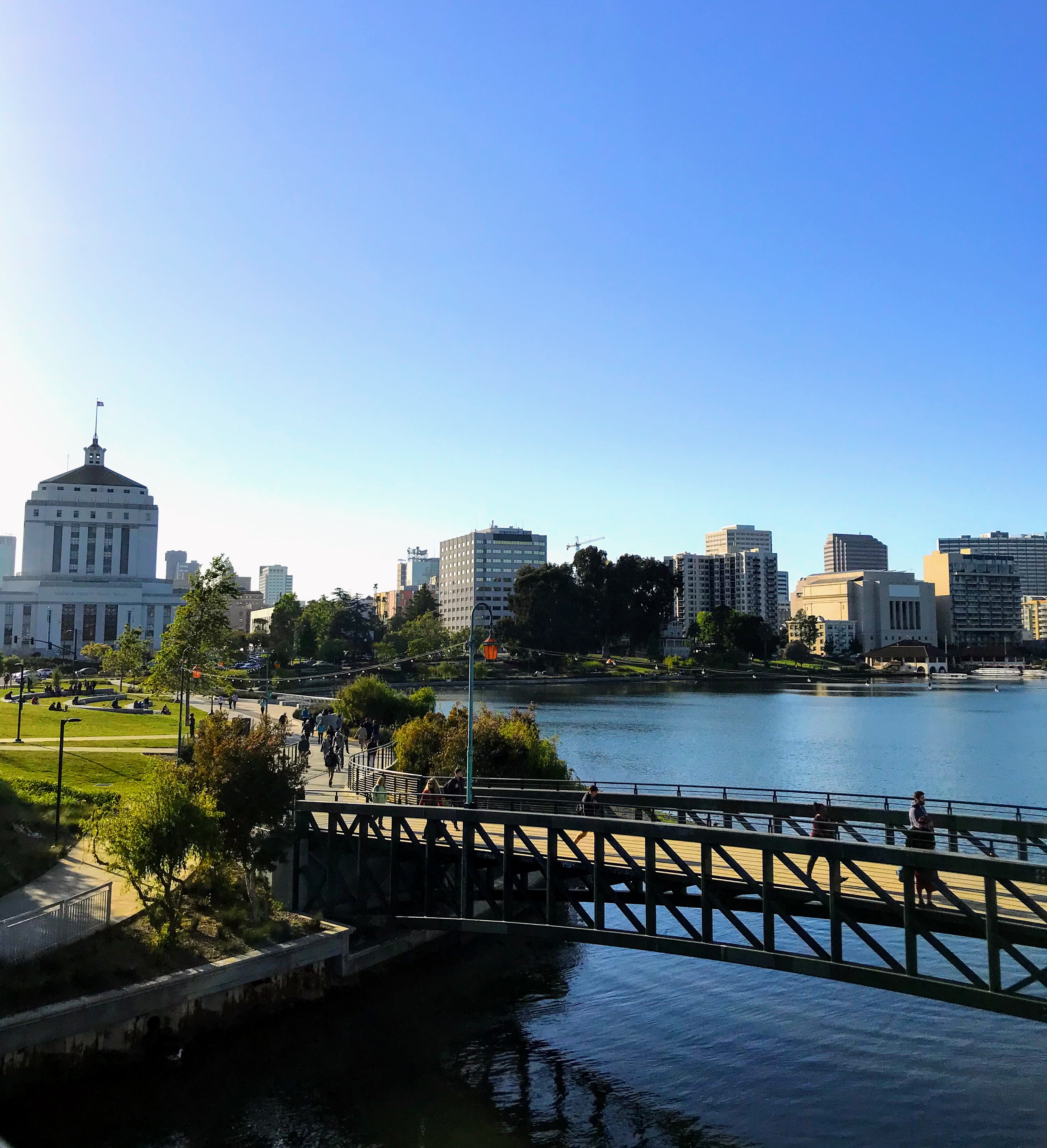 What is the Strategic Plan?

This Strategic Plan came out of Transport Oakland’s annual retreat in December 2018. This is the guiding document for Transport Oakland for the next five years. It lays out our goals for continued progress in Oakland, our initiatives, and how to get involved in bringing better transportation to Oakland.

In July 2018, Transport Oakland voted in an almost entirely new board of six people and six months later in January 2019, added another three board members for a total of nine board members. These new members brought renewed energy and new skill sets to the mission of improving transportation in Oakland. With experience in advocacy, transportation planning, finance management, organizing, and policy, the revamped board aims to utilize these skills to find the barriers to great transportation in Oakland and gain a better understanding of how to address them.

With some fresh faces on the board in June, TO put its new energy into electing transportation minded candidates in several local and regional elections. TO interviewed candidates for Mayor and City Council in Oakland and BART and AC Transit Boards of Directors to get a clear picture of candidates’ transportation priorities, which enabled us to put our political power into endorsements for those who had the strongest and most realistic goals for improved transportation in the city and region.

With a number of new board members, the Board held a retreat in late 2018 to discuss the barriers we each saw to improve transportation and decide how we could address them collectively. The Board brainstormed big issues, broke them down into programmatic categories, and came up with some big goals for a sustainable and strategic plan for Transport Oakland in 2019.

The retreat goals were:

In 2019 Transport Oakland advocated for, and won the passage of OakDOT’s 3 Year Paving Plan that tripled the funding for paving streets across Oakland. This plan distributed 85 percent of local street spending using an equity formula that placed equal importance on serving areas with higher underserved populations and fixing the worst local streets. During the budget cycle, we preserved the independence of OakDOT after budget amendments were released that called for OakDOT to be merged back into Public Works. Last but not least, we won Oakland’s first transit only lanes when the City Council approved the Broadway transit lanes as part of the East Bay Bus Rapid Transit project.

GOALS FOR TRANSPORT OAKLAND THE NEXT FIVE YEARS

Based on the robust discussion at the retreat, Transport Oakland has crafted initiatives for each of its three organizational goals:

This initiative works to understand City outreach efforts and work with the Oakland Department of Transportation and other relevant City agencies to ensure consistent and transparent outreach is used for all City transportation projects, both large and small. This initiative will focus on building an understanding of the current process and ongoing improvements, identifying areas of improvement, and building a collaborative strategy with OakDOT and other advocates to bring transparency to the outreach process.

This initiative works to promote multimodal priority transportation planning and implementation on major corridors. The Fix the Streets committee will work to create a baseline of understanding of the institutional challenges to multimodal transportation in Oakland, identify specific policy pinch points that are barriers to strong multimodal planning and implementation, and develop a strategic policy framework to build on in future years.

OakDOT is new, and while it is making great strides in its first years, the agency faces significant challenges to implementing its mission. This initiative focuses on supporting the agency in achieving the goals the City has for it. Foremost is filling the vacancies that make it difficult for OakDOT to implement planned improvements, such as the Paving Strategy.

OakDOT manages a wide array of transportation projects in an effort to maintain, improve, and transform the City of Oakland’s streets. These projects range from small, low-impact projects with relatively short timelines to large, multi-year projects with the potential to impact thousands of people. There are recent examples of exemplary OakDOT-led outreach, such as for the Oakland Bike Plan update, that involved partnering with community-based organizations to conduct equitable and culturally competent outreach. For other projects, it is hard to find even basic project information online. It is clear OakDOT projects do not have a consistent outreach and engagement formula. The level of citizen engagement for a project is largely dependent on the interest of the project manager, available project budget, and the project delivery timeline.

The overall mission for this initiative is to understand City outreach efforts and work with the Oakland Department of Transportation and other relevant City agencies to ensure consistent and transparent outreach is used for all City transportation projects, both large and small. In 2019, this initiative will focus on building an understanding of the current process and ongoing improvements, identifying areas of improvement, and building a collaborative strategy with OakDOT and other advocates to bring transparency to the outreach process.

How to get involved:

Oakland has been a Transit First city since 1996 and has stated Strategic Plan goals to improve Oakland’s bikeways and pedestrian safety. Despite these intentions, recent major corridor plans such as Park Street and Telegraph Avenue have strongly contended with car user interests and struggled to coalesce around clear priority for transit, bike, and ped street users.

Fix the Streets is an initiative focused on bolstering multi-modal planning and implementation through both direct advocacy and strategic policy development.

The overall mission of this initiative is to promote more multimodal priority transportation planning and implementation on major corridors. The Fix the Streets committee will work to create a baseline of understanding of the institutional challenges to multimodal transportation in Oakland, identify specific policy pinch points that are barriers to strong multimodal planning and implementation, and develop a strategic policy framework to build on in future years.

However, while policy takes time to develop and advocate, this initiative will work on moving the conversation forward through direct advocacy and involvement in active planning projects. The goals for this year are A) to map out major corridors to focus our direct advocacy resources on, B) identify opportunities to push for multimodal priorities in these processes and C) advocate directly via working group participation, letters of support, and public comment in support of stronger multimodal options.

How to get involved

OakDOT has a staff vacancy crisis. The new department was created to better manage Oakland streets and implement much-needed transportation projects throughout the city. The October 2019 Semi Annual Vacancy Report showed that 20% of the authorized and funded positions at OakDOT to plan and design our streets were vacant. Without these employees OakDOT is struggling to plan and implement projects in a timely manner to repair and fix our streets and is turning down opportunities for grant money as OakDOT lacks the capacity to meet funding deadlines. OakDOT, for the moment, has substantial resources and money to repave streets, slow speeding drivers with traffic calming design elements, repair sidewalks and add curb ramps and high visibility crosswalks, expedite AC Transit buses through transit spot improvements, and add protected bike lanes using funding sources like Measure KK and Measure BB, but as a direct result of the vacancy crisis these projects are being delayed.

Transport Oakland is aware of several factors that led to this vacancy crisis including an understaffed Human Resources department, a cumbersome and lengthy recruiting process, and uncompetitive compensation compared to other public agencies (local and regional) in the Bay Area. This crisis also appears to be city wide as numerous departments have vacancy rates similar to OakDOT’s. Gaining a deeper understanding of the root of the staffing problem will help us find ways to advocate for concrete change both within OakDOT and in other related Oakland administrative departments like Human Resources.